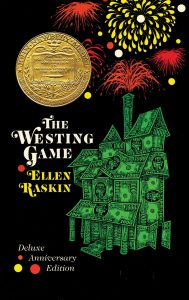 The Westing Game by Ellen Raskin was one of the first chapter books that I remember reading.

Sunset Towers is a new apartment building on Lake Michigan, north of Milwaukee and just down the shore from the mansion owned by reclusive self-made millionaire Samuel W. Westing. (Despite its name, Sunset Towers faces east – into the sunrise.) Sam Westing was a wealthy man who made his fortune in paper products. He was very patriotic and never smoked, drank, or gambled.

If you are doing your own Book Club at home consider checking out this additional study guide available on the Idaho Digital Consortium. The Westing Game Instructional Guides For Literature. 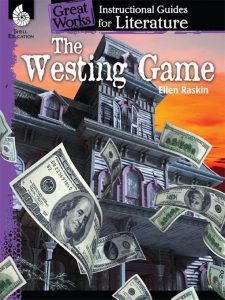 The discussion was led by Elaina.  We started by playing a little game.  It is a game you could easily do at home.  Each kid was given five minutes to find props around their home to represent a character they chose from the book.  They had to hurry because if their character was chosen they would have to switch.  A few of the items used were a strand of pearls, a coffee cup, a pair of binoculars, a newspaper.   Creativity is important when reading.

“Ever wondered about who you really are, or who you might have been if you were born into different circumstances? What about the kind of stuff you could do with hundreds of millions of dollars? If you’ve considered an aspect of those questions, then this is a book for you. Thinking about who you really are is a massive and tough question. But thinking about what we could do if we became super-rich is the kind of thing we all like to dream about. Add in one of the most complicated strategy games you’re likely to see, add a dash of constant suspicion, and top off with a hunt for an evil murderer… Forget James Bond movies, this is what it means to be part of a real thriller. So, dig into The Westing Game, have fun, and sharpen your own spy skills in the process. ”  A Lively Learning Guide by Shmoop available on The Idaho Digital Consortium for free. 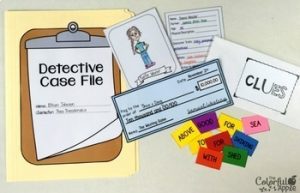 If you are reading The Westing Game at home with a sibling group consider playing a Westing Game version of CLUE.  Create a Detective Case File.

In reality all the characters in the book are winners. All characters are winners because Mr. Westing’s purpose in creating the game had a twofold purpose: (1) find the best heir of the Westing fortune possible, the one who will think strategically and keep secrets–traits that are necessary for protecting the fortune; and (2) help the other characters find their own identities; in helping the characters explore and find who they are as people, he gets the opportunity to observe who they are as people.  They all win because they all learned their strengths.

You can check out the Westing Game here:

If you are looking for an additional fun activity create A Storyboard.   Storyboard That is a website to create your own characters and putting them in a scene.  The Westing Game is a fun book to do this with because the characters are so unique.

Join us on ZOOM every Wednesday at 3:00