Imagine your father running a prison?  Many middle schoolers at times may feel that their parents run a prison with their strict rules, but Cammie’s father actually runs a prison.

Imagine living in prison as a middle schooler, not like juvenile, but an actual prison.

What is a mother’s role?

If you were to choose between Boo Boo or Eloda for a mother figure who would you choose?

Cammie struggles to come to terms with the mother who died to save her from harm while interacting with some of the reformed inmates, including one who makes a staggering sacrifice.  Why do you think the prisoners in the story are reformed and do you think prisoners today reach the same process of reformation? 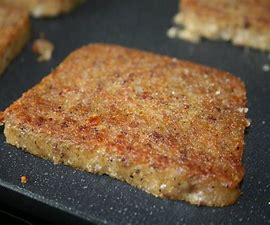 What in the world is fried scrapple?

Food
Scrapple, also known by the Pennsylvania Dutch name Pannhaas or “pan rabbit”, is traditionally a mush of pork scraps and trimmings combined with cornmeal and wheat flour, often buckwheat flour, and spices. The mush is formed into a semi-solid congealed loaf, and slices of the scrapple are then pan-fried before serving. Scraps of meat left over from butchering, not used or sold elsewhere, were made into scrapple to avoid waste. Scrapple is best known as an American food of the Mid-Atlantic states. Scrapple and panhaas are commonly considered an ethnic food of the Pennsylvania Dutch, including the Mennonites and Amish. Scrapple is found in supermarkets throughout the region in both fresh and frozen refrigerated cases. In Delaware, it is sometimes described as containing “everything but the oink”.
All that from Wikipedia.  In short it looks like it is breakfast Spam.
I am going to add this book to the 50 State challenge as my YA book pick and offer up a bonus brag tag to anyone who attempts to make Scrapple.
Elaina will be leading the student  discussion.
How do you think Cammie was different than the other kids because of the loss of her mother at a young age?
How does the Father working all the time impact what Cammie does?