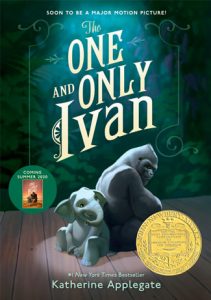 Inspired by the true story of a gorilla who spent 30 years alone in a cage at an indoor zoo in a mall, this beautiful book imagines what that gorilla might have felt and said about his life. Ivan does not dwell on his memories as does his friend Stella, an elderly elephant in the cage next door. Still, he remembers his life with his family in the jungle, the death of his sister, and his early days being raised by Max, the owner of the animal show. He also has memories from his long, lonely interment with only a television, a stuffed animal, and a stray dog who sneaks into his concrete cage to sleep on his chest for company.
Ivan loves to paint. He can remember making designs on his mother’s back as a young ape, and now Max sells the pictures that Ivan creates each day. The custodian’s daughter also loves to paint and shares her supplies with Ivan, giving him new ways to express his experiences.
Yet life at the animal show is becoming increasingly distressing. Stella has an infection on her foot that Max ignores because he is low on money. When he purchases a baby elephant to revive interest in the show, both Stella and Ivan are concerned about how he is treating this gentle youngster. Encouraged by Bob, the stray dog, and inspired by Stella, Ivan begins to imagine rescuing not only the baby elephant but himself. Perhaps his painting is the key. Maybe he can use it to change the animals’ lives forever.
These unforgettable characters overflow with pain and love in an ultimately hopeful story about the healing power of art.

How does knowing the story is true change your perspective on Ivan?

3. How does Ruby change things for Ivan?

We will be discussing all the questions on the Discussion Guide provided by the author:

Birds of a Different Feather. Many of you in this group are friends but not because of your similarities, but rather your differences.  We are going to add to this blog after book club some of the best examples of odd paired friends from the internet to book club.

Let’s Talk About The One And Only Bob 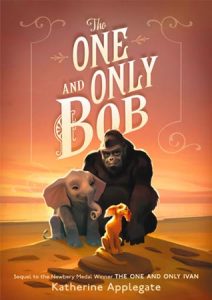 Bob is a realist. Once a homeless puppy, tossed out of a truck on a
highway, he has learned the hard way how to be a survivor. One thing’s
for sure—it certainly helps to have good friends, like Ivan, the gorilla
who let Bob sleep in his cage at a shopping mall. Bob was part of
the plan that helped Ivan and the baby elephant Ruby
move to a nearby zoo and a much-improved
habitat, while Bob’s reward was to be
adopted by Julia, whose dad now works
at the zoo. It was a happy ending for all,
especially since Bob can now visit his old
friends by sneaking into the zoo in Julia’s
backpack. But Bob has a secret about his past,
something he was too ashamed to share with
anyone, until . . . a series of events forces Bob to
share his secret. In the chaos of a horrendous
hurricane, Bob needs to find the courage to help his
best friends and allow them to help him in ways he
never dreamed were possible.

Zoo Boise turns the act of visiting a zoo into a conservation action.

Part of every admission and proceeds from our most popular attractions go to the Zoo Boise Conservation Fund which supports the protection of wild animals in Idaho and around the world.  Helping endangered species is easy and fun at Zoo Boise.

How does our Zoo locally (Boise) measure up to other zoos?

What is the difference for Ivan at the Mall vs the Atlanta Zoo?

How can you change the life of an animal today?

Art to help with loneliness.   During the last few months we have all felt the sting of loneliness being separated from our friends.  How many of you have used art during quarantine?

How did reading about Ivan make you feel?