Our mascot is a Dragon.  We like to say “I’m not a bookworm, I’m a bookdragon.”   Although many libraries do not have a mascot as cool as a dragon, many libraries have mascots.  Today, Groundhog Day there is probably none as cool as the Punxsutawney Memorial Library. Pennsylvania is a wonderful state, with several hidden gems. Today, all eyes are on Punxsutawney.

Punxsutawney Phil lives at the Library.  The Punxsutawney Library is the famous groundhog’s home.

Every February 2nd, in the United States and Canada, we celebrate Groundhog’s Day.  In need of a nice welcomed break during the winter, on this day the groundhog awakens from his nap and goes outside to see if he can see his shadow.  It is believed by many that if the groundhog sees his shadow that there will then be six more weeks of winter. If this is so,  he then retrieves back into his den and goes back to sleep.  If he is not able to see his shadow, the groundhog remains outside to play and people celebrate believing that spring is just around the corner.

As the Germans settled in the hills of Pennsylvania, they brought this tradition with them.  The tradition was based on Candlemas, which is the day that is the midpoint between winter and spring.

Punxsutawney, Pennsylvania has been chosen as the site for the annual Groundhog day event.  Thousands of people come to the town of Punxsutawney on Groundhog Day for this day of celebration.

Although already a well known day, Groundhog Day received widespread attention as a result of the 1993 film Groundhog Day, which was set in Punxsutawney.  It reminded us of several life lessons. 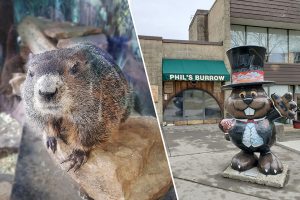 That is correct Punxsutawney Phil is a library resident.  The article from American Libraries Magazine is a fun little read.

It is often difficulty for us to think spring with 3 feet of snow on the ground.  Seasonal Affective Disorder is very real for kids as well as adults.

Seasonal affective disorder (SAD) is a type of depression.  Don’t brush off that yearly feeling as simply a case of the “winter blues” or a seasonal funk that you have to tough out on your own. Take steps to keep your mood and motivation steady throughout the year.  St. Luke’s Health  can be reached  at (208) 634-2221