My heart is breaking.  I am writing not as your librarian, but as your neighbor.  I am writing to share my heart and encourage you as parents to better address the systemic problem of racism that we as a Nation are faced with.

Recently, the Middle School Book Club read the book, The Hate You Give.  I was honored to participate in a discussion with several of our middle school students regarding race.  Cason had chosen the book and helped lead the discussion.  I take a great deal of pride in Cason’s ability to speak out, not just as a parent figure in his life, but also as his librarian.  Prior to Cason’s first march, I encouraged him to read. I wanted him to truly understand what his protest sign meant.  I fully understood how easy it would be to get wrapped up in the excitement of a rally, a protest.   The chants, the camaraderie, the feeling of making a difference are an adrenaline rush.  I wanted Cason to enjoy the experience, but I also wanted him to understand the experience.  Understanding the magnitude of what he was doing was important.

One of the chants was “No Justice No Peace.”  When we got in the car he questioned how long we have been shouting that.  My response was something on the lines of  “far too long.” The next part of that chant is “No Justice No Peace No Racist Police.” He proceeded to ask me several questions about why police are racist.   This is where I rewind our life story a little and let you know that Cason at one point in his life believed he was a demi-god, having read Rick Riordan’s The Lightning Thief.  He truly believed that at some point someone was going to show up and take him off to Camp Half-blood.  It was at that moment I knew it was easier for me to explain mythology than racism.  The idea that we could live in peace was such a foreign concept, he had a greater likelihood of actually being a demi-god. There was a greater likelihood that this child’s father was Zeus than that he would be able to live a life in which he never encountered hatred in the form of racism.

How do we teach our children to live in peace?

I know as parents right now you are asking yourself, ‘How do I explain this to my children?’  I have received many emails asking for help. Emails to me as a librarian, emails to me as a friend, but mostly emails to me as the person raising a black child.    Questions range from ‘How do I teach my child not to be racist?’  ‘How do I explain George Floyd?’  ‘Has Cason ever experienced racism?’   ‘Can I recommend a book about racism?’ to “Why do I think people are racist?”  I can tell you that some of the questions are easier for me to answer than others. 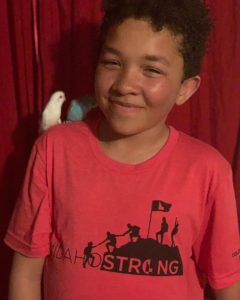 I will tell you that Donnelly, Idaho, is a wonderful place to live. We experience a level a peace in our community that is unmatched.  I have never ignored the big bad world that is out there, and have never ignored my privilege of living in our own little peace of heaven.   Can racism still happen in this place of peace?  YES.  I’ve been called to the school for a racist joke and racial slurs from Cason’s classmates; I’ve been called to the school for unintended racism on the part of another student that broke his heart; I’ve also had Cason tell me how much it bothers him on the school bus for girls to touch his hair and call him a sheep.  They make jokes about him being the black sheep. They laugh and giggle and make fun of him.  I’ve also watched him explain to others his age that the white power symbol offends him and is racist, but they continued to use it and dismissed his protests, resulting in his no longer being friends with many of them.  I’ve also watched Cason be overlooked for things and have him question whether or not it was because of the color of his skin.   The first time Cason ever tried out for a play a little girl told him he could not be Simba because of the color of his skin.  I prayed for four days that he would be cast as Simba. I begged God, “PLEASE,  Please let him be Simba.”  This play celebrates African heritage and I so wanted him to have a lead role, but I also did not ever want him to think he could not be something because of the color of his skin. 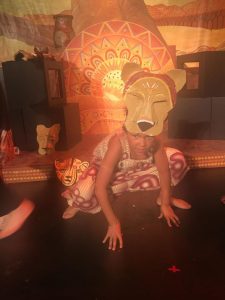 Do I raise Cason differently than a parent of a white child?  YES, but I believe all good parenting begins with love at the core.

Here are some suggestions:

1. Learn to be accountable for our actions.  (For White people this especially means being accountable to People of Color, rather than paternalistic.)

2. Recognize that just because you did something racist and someone points it out for correction that does not mean they are calling you a racist. I do not think you are secretly hiding a swastika tattoo or are a white supremacist.

4. Don’t use cliches like “I’m the least racist person you’ll ever meet.”  Just saying it is cringe worthy.

5. Make friends with people of color.  Make a point to include diversity in your friendship circle.

6. Talk to your kids about race.  HAVE THE DISCUSSION.

9. Challenge your own personal stereotypical beliefs.

10.  SPEAK !  Speak up.    Speaking iss not just me requesting you to carry a sign in protest, but me imploring you to speak out against racial injustice.  Speak out in your daily actions.  Speak out by who you choose to elect, not just as president, but locally from your sheriff to your prosecutors.  Choose locals who are anti-racist. 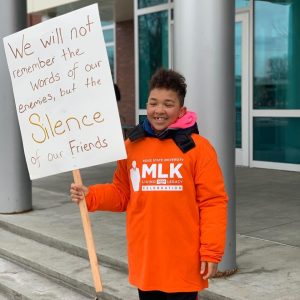 The Hate U Give

Cason and I throughout the month of June will post a video every week on the Library’s Youtube channel: Conversations About Race.

Because black lives matter we must stand up and speak out to end systemic oppression and police brutality.  Silence is compliance. #BlackLivesMatter