My name is Brian Naugle and I hope to be the next Valley County Prosecuting Attorney. I’ve lived in Idaho for 30 years, and am a graduate of Boise State University and the University of Idaho College of Law. For 15 of those 30 years, I have been a Deputy Prosecutor in Ada County, handling a wide range of cases and developing skills and knowledge in nearly every area of County Prosecution. In addition to serving as lead counsel in dozens of criminal jury trials, I have been trusted with some of Ada County’s most high profile and difficult cases, including the Adam Dees triple homicide and the Bruce Marchant homicide.  I hope to bring the knowledge and skills I’ve gained as a prosecutor to Valley County. My wife and I, along with our three children, are absolutely in love with Valley County, having spent many days camping, skiing, hiking, and rafting there and it would be a dream come true for us to be able to live and work in Valley County full time.

Serhiy “Gus” Stavynskyy immigrated to America in 1998 fromUkraine. He lived in New York where he went to Columbia University and received his BA in History in 2004. Serhiy worked for the New York City Police Department for seven years, from 2000 to 2007, starting as a Police Cadet while in college and ending his law enforcement carrier as a Police Officer in Brooklyn. In 2007, Serhiy was accepted to the Valparaiso University School of Law in Northwestern Indiana. In 2010, Serhiy graduated Law School and was admitted to the Illinois State Bar. The same year, Serhiy followed his fiancee Amy to Idaho Falls. Shortly after moving to Idaho Falls, Serhiy was hired by Pendlebury Law Office. In 2011 Serhiy passed the Idaho Bar Exam. Serhiy opened a general practice law office, Skyy Law, PLLC on State Street in Boise in 2011. In 2013 Serhiy was offered a position with the Valley County Prosecutor’ office, where he has been working ever since. Currently, Serhiy is a Chief Deputy Prosecutor at the Valley County Prosecutor’s Office. He lives in Donnelly with his wife Amy and their two children: Holly and Hunter. 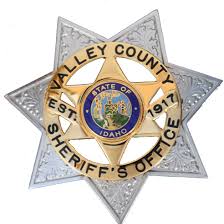 My name is Jim Cole and I’m running as a Republican seeking the Office of Sheriff of Valley County. I’m a retired Lt Col who first served as an enlisted soldier in the US Army and then as an intelligence officer and F-16 Pilot in the US Air Force (Oklahoma Air National Guard). While serving in the Oklahoma Air Guard, I was also a Tulsa OK police officer. I retired from the military with 26 years of service in 2015 and as a Tulsa Police Officer with 20 years of service in 2017. I’m currently involved in the American Legion as a Vice Commander at local McCall post 119, volunteer with Adaptive Wilderness Sports of McCall (AWeSOMe), volunteer with the PTA at Barbara Morgan Elementary, and am involved in the McCall Rotary Club.

Jason Speer has lived in Valley County since 2000.  He worked at the Valley County Sheriff’s Office until he resigned August 2019.  During his time here he raised his four children with his wife Trisha. They also purchased the Roxy Theater to save her from development in 2006.  Jason is running because he was to bring a change of direction to the agency and the community it serves.

Micah will bring a fresh perspective and leadership to the Sheriff’s Office. Old methods aren’t working, and “new blood” is needed. Micah served as a deputy in Nevada and locally for the Cascade PD. Micah has lived in Idaho for 20+ years and is aware of the community’s needs of fiscal responsibility, proactive transparency and greater positive interaction with the community. Micah has a unique blend of not being a career cop, but having served in law enforcement long enough to understand the complexities of the job. This allows him to more clearly see the job from the community’s perspective as well and not just as a cop.

My name is Joanna “Jo” Roop and I want your vote for Valley County Sheriff.  My home is in Donnelly, I own property in McCall, and I had a rental in Cascade. Having been raised in Wyoming by an outfitting/horse packing family, I naturally love the activities our area has to offer.  I policed Alaska as a State Trooper and offer my personnel file as proof of providing outstanding service and leadership. I retired as a Lieutenant on the Director’s Staff after 22 years. Being a Marine Sheriff’s Deputy for Valley County last year inspired me to serve in a more significant role. As a business owner, I’ve provided years of property management, security services, and vacation home rentals. Locally, I own Able Property Services, which now includes providing sailboat charters on Cascade Reservoir. I view my Sheriff’s role as working with the community to provide leadership that ensures Valley County remains a little piece of heaven and a safe place to live.  My law enforcement and business credentials make me uniquely qualified to tackle the challenges that a Sheriff will face in Valley County. I will be responsive and lead with integrity.

Also not represented due to lack of submitted responses are:

Any Candidate for County Commissioner

Candidates have until March 13th to file and so additional candidates may still be added.

We thank each Candidate Participating in our Candidate Meet and Greet.

Written material also available for the May 19, 2020 Bond Election

The Candidate Meet and Greet serves the County as a whole and we would be missed if we did not include this with our ballot information.   (Note: The Library Bond is ONLY for McCall City Residents.)