From the first state to the last…

THE CENSUS IS IMPORTANT!

Delaware is the first state in the United States.   Census in Delaware

The area of Delaware was part of the original territory of the United States. Included in the grant to William Penn, the Three Lower Counties (Delaware) were annexed as part of the grant establishing the Province of Pennsylvania in 1683. The counties were granted a separate charter providing semi-autonomy in 1701, with generally the same boundary as the present state. In 1776, Delaware declared itself a separate government. Delaware ratified the U.S. Constitution on December 7, 1787; it was the first of the original 13 states to join the Union.

Census data for Delaware are available beginning with the 1790 census.  According to Census.gov 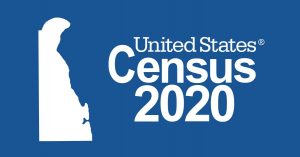 2.Math: Delaware has participated in every Census since 1790.   Practice your math skills by figuring the % percentage % of growth increase over the years.  Once you figure the average increase tell your parents what you “guess”timate it will be in 2020.  “Guess”timate instead of estimate because populations change for a variety of reasons.  We cannot accurately estimate future populations because there are so many contributing outside factors; that is why the Census is so important.  Click here for more census data on Delaware: HERE

3. Science: Natural History is the scientific study of animals or plants, especially as concerned with observation rather than experiment, and presented in popular rather than academic form. Exploring natural history is something our children in Valley County are typically quite familiar with.  Thanks to resources like MOSS and the benefit of having the Payette National Forest in our backyard.

The Delaware Museum of Natural History has a number of ONLINE opportunities during this time.    Including a behind the scenes tour. 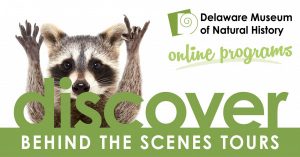 They also have an online story time on facebook.  (Similar to ours that we host every weekday at 2:00 P.M. ) Delaware Museum of Natural History

Delaware is rich in history.  Delaware is the first of 13 to ratify the federal Constitution, nicknamed The Diamond State by Thomas Jefferson because it was “the jewel among the states. ” Delaware was also home to the Underground Railroad. The Delaware Historical Society has created some enrichment activities for your children to do at home.   The Underground Railroad in Delaware

We the People of the United States, in Order to form a more perfect Union, establish Justice, insure domestic Tranquility, provide for the common defence, promote the general Welfare, and secure the Blessings of Liberty to ourselves and our Posterity, do ordain and establish this Constitution for the United States of America.

6. Book Pick: Standing In The Light

“The Lenape are my neighbors. Sitting here peacefully, I feel a current of God’s love running through this life, though He is known here by a different name.“
—Catharine Logan[2]

Standing in the Light: The Captive Diary of Catharine Carey Logan is an entry in the Dear America series. It was written by Mary Pope Osborne and first published in September 1998 by Scholastic. The book was republished in May 2011 with new cover art. A television film based on the book was released in 1999.

Catharine Logan and her brother Thomas are captured by Lenape Indians in 1764. 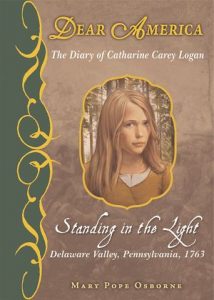 This is a great time to start a new series.  If you are a younger reader and want to start the Magic Treehouse books or a little older and want to begin the Dear America Series.  I encourage you to read as many as you can from each series.

7. Art: Poetry is art.  Delaware Division of The Arts

Delaware Division of The Arts has a program called Poetry Out Loud.  Several individuals have read their poetry out loud and it is featured on the website.   Take some time and write your own poem about Coronavirus and video it.  Text it to Miss Sherry 208-630-3723 to have it featured on our website in our very own Poetry Out Loud.

Delaware is known for their turkey dinners, peach pie, pecan pie, and more.  Sounds like thanksgiving to me.  YUMMY!   Coronavirus has brought us a loss of Saint Patrick’s Day and now Easter.  Why not make up a new holiday. Enjoy a Thanksgiving style dinner and maybe implement some favorite things from Thanksgiving and throw in some other holiday favorites.  Name the holiday something fun and commit as a family to celebrate it each year on this date to remember this time.  It can become the celebration of remembrance of this tough time.  Make sure everyone in the family gets a say and create the BEST holiday ever.