Today we dove into learning about Iceland, the land of fire and ice! 80% of Iceland is uninhabitable due to the many active volcanos, geysers, and glaciers. Iceland’s flag represents the three parts of its land: red is for the volcanic fires; white for the snow and ice fields of the island; and blue is for the surrounding ocean. Artic foxes are the only native land animals to Iceland. Almost all of Iceland’s electricity and heating comes from hydroelectric power and geothermal water reserves! Icelanders tend not to have last names, rather they use their father’s name. Icelanders are descendants of Vikings. One well known Viking is Leif Erikson (Leif the Lucky), son of Erik the Red. We read a story, Leif the Lucky, about Leif Erikson who adventured to Greenland and eventually to America! Leif Erikson was the first European to travel to North America! 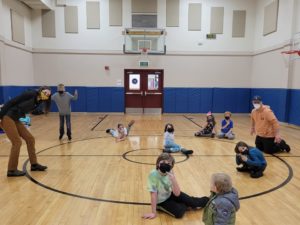 To get an extra stamp, I also read How To Be A Viking.  This book could have worked for several countries, but I chose to have it work for Iceland.